Convergence of Social Protection Programmes in India: The Impact of Self-Help Groups on Access to and Employment Under the Mahatma Gandhi National Rural Employment Guarantee Scheme

The Evidence Consortium on Women’s Groups conducted a study to examine the convergence between large-scale self-help groups and public works programming in Bihar. We use publicly available administrative data from the National Rural Livelihoods Mission and the Mahatma Gandhi National Rural Employment Guarantee Scheme (MGNREGS) from 2013-2020 and merge those data with data from a randomised controlled trial (RCT). The combined dataset allows for an instrumental variable regression analysis to examine the impact of the number of SHG members on access to job cards and employment under MGNREGS. We find large and statistically significant effects indicating that an increase of 100 SHG members results in 26 additional MGNREGS job cards applied for, and 14 additional households that are provided employment under MGNREGS. We find larger impact estimates on access to job cards and employment for scheduled caste and scheduled tribe households, and evidence for similar effects for women and men. We present the results in a brief and a working paper.

Self-help groups and COVID-19: Effects on and challenges for the National Rural Livelihoods Mission in India

The COVID-19 pandemic and some of the associated policy responses have had significant, negative impacts on women’s lives around the world, and in India (Agarwal, 2021). India experienced three COVID-19 waves, including a devastating Delta variant surge that peaked in March and April 2021. The Evidence Consortium on Women’s Groups developed a brief that focuses on the gendered impacts of the COVID-19 pandemic, and especially the impacts on members of women’s self-help groups (SHGs) before the Delta variant peaked in India. We synthesize evidence from various studies on the impacts of the COVID-19 pandemic on SHG functioning as well as the responses from and through SHGs and their federations under the DAY-NRLM up until March 2021. The findings capture lessons about how to adapt SHGs and other women’s group policies in response to large covariate shocks, such as the first year of COVID-19; this brief does not include an analysis of the effects of the subsequent Delta variant, however, which resulted in widespread direct health and economic shocks that exacerbated some of the consequences of the COVID-19 pandemic analyzed in this brief.

Using data on a large women’s livelihoods program in India – the National Rural Livelihoods Mission (NRLM) – and a difference-in-differences design, this paper estimates that average monthly savings by SHG members of the NRLM declined by 85% during the nationwide lockdown from March to July of 2020. Decline in monthly SHG savings was likely driven by loss in income sources combined with lockdown stringency. Data from longitudinal phone surveys in six states indicate 30% decline in consumption and 26 percentage-point decline in work opportunities for both SHG and non-SHG households during this time. Although SHG households had lower consumption pre-pandemic compared to non-SHG households, both groups were equally impacted by the lockdown. In addition, households that received assistance from SHGs in procuring food grains or through community kitchens reported significantly lower rates of food insecurity. We present these results in a working paper. 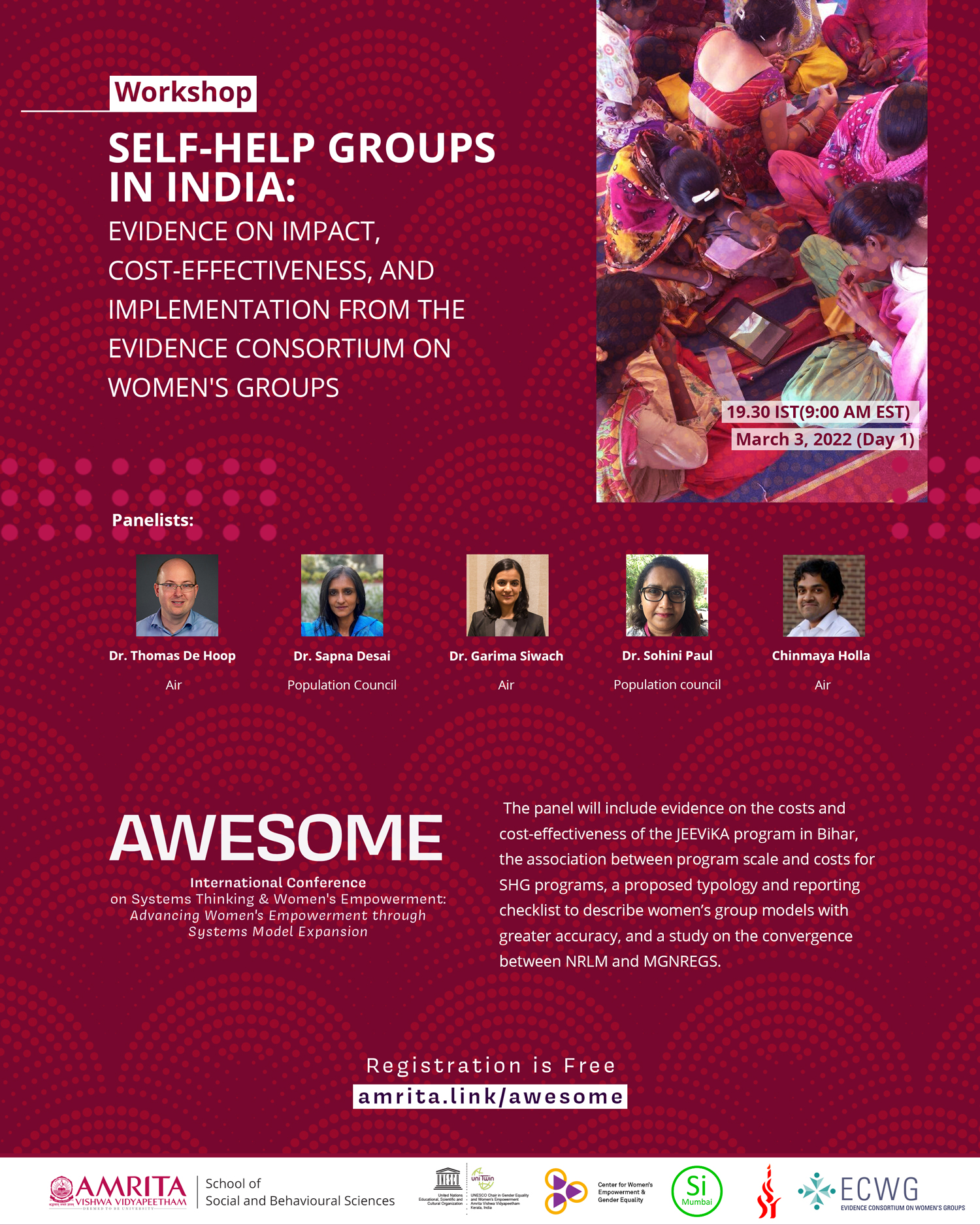 You are invited to join the International Conference on Systems Thinking & Women's Empowerment: Advancing Women's Empowerment through Systems Model Expansion also known as the AWESOME conference. It will take place March 3rd through 5th – virtually – and is hosted by Amrita University, India and co-organized by Systems Innovations (Mumbai Hub).


Some parts of the conference will be live-streamed on the AMMACHI Labs YouTube Channel. For more information, reach out to awesome@ammachilabs.org

Government programs supporting self help groups (SHGs) generally target women on the assumption that doing so enhances women's decision-making. The empirical evidence, however, is mixed. We advance and test one explanation: the loan amounts offered by most SHGs may be too small to impact women. Our analysis is based on SHGs developed under India's National Rural Livelihoods Mission, a program that supported both small loans from internal savings and larger loans through Community Investment Funds (CIFs). Exploiting variation in their phasing and amount, we document a large effect of CIFs on women's decision-making and on intra-household allocations. 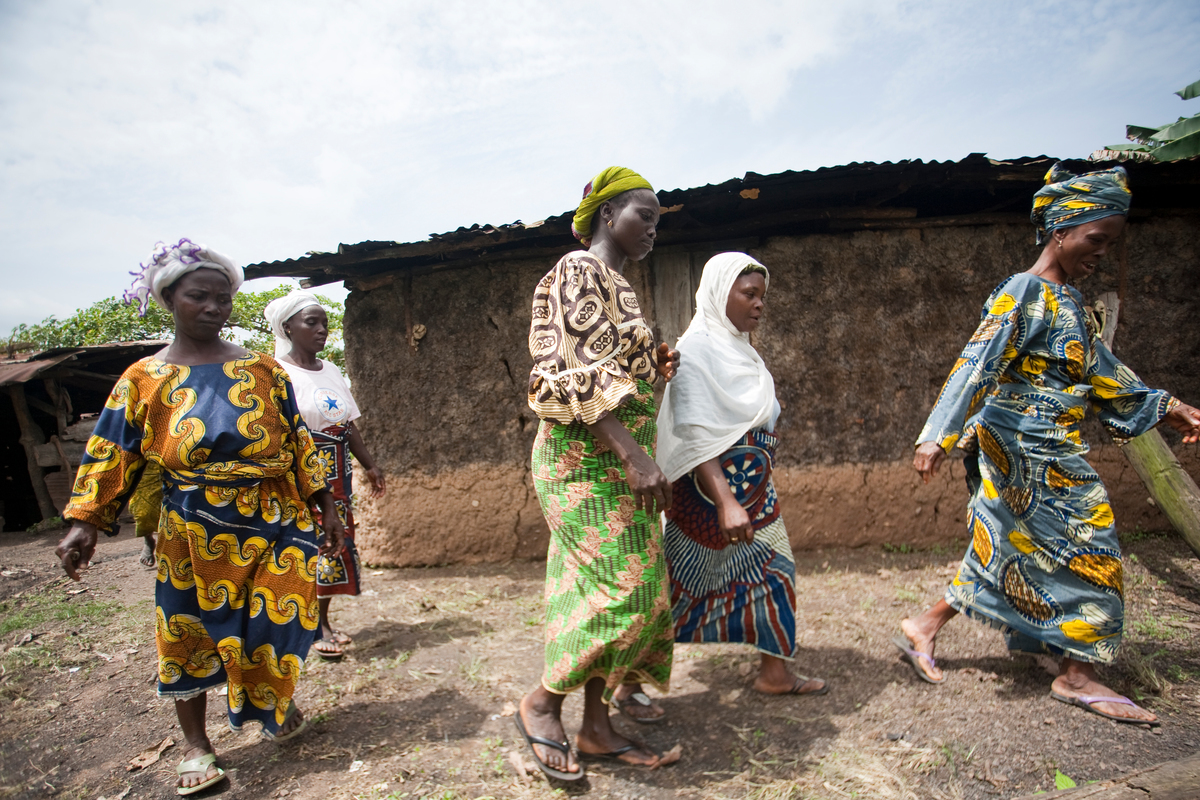 This document presents a systematic literature review that aims to analyze the impact of belonging to rural productive associations on the different dimensions of the empowerment process, namely: resources, agency and results. To this end, A systematic literature review methodology of five quantitative articles and eight qualitative articles is used. In the case of quantitative ones, an organization based on the component of the empowerment process evaluated is presented and the size of the standardized effect is estimated; In the case of qualitative, a content analysis of the findings is carried out following the same organization by process dimensions.

Microfinance has been a staple of rural development policy for over three decades with significant governmental and private sector backing. From its origins in small-scale non-governmental initiatives, microfinance became institutionalised and globalised under the rubric of financial inclusion in the 1990s. Work within the critical agrarian studies tradition has been at the forefront of scrutinising the claims made about the transformational power of microfinance. Engaging both the paradigms of microcredit and microinsurance, this chapter highlights how empirical case studies within the field of agrarian studies has illustrated a wide range of evidentiary deficits and conceptual flaws within the paradigm of financial inclusion.

In Nepal, a few governmental and community-based programmes for elderly care are in place; however, information about successful implementation and overall effectiveness of these programmes is not well understood. In this article, we introduced these programmes and discussed existing programmes’ gaps and implementation problems in light of existing grey and peer-reviewed evidence. A few notable governmental programmes, such as providing monthly allowances, pensions and free health care, have targeted specifically the elderly individuals. Yet, most health care institutions and providers are privately owned and profit-oriented, and there is a general lack of proper governmental health as well as social security systems for the elderly in the country. Generally, Nepalese communities consist of neighbourhood-based and religious-based groups that provide emotional and spiritual support to elderly individuals as well as provide support for health care access when needed. However, the influence that these groups can have on health and social well-being of elderly remains not well understood. Traditional family-based support systems may be feasible only for some families, while for others it could impose financial and psychological burdens. The role of the state is important in the effective implementation of existing programmes as well as in the development and implementation of additional programmes to ensure health and social well-being of elderly individuals. Furthermore, there is a need to establish partnerships with existing community structures and to mobilize them in the implementation of community-based programmes.

Exploring Participation of Women in Self-Help Groups: A Study of Two Blocks in Darjeeling District

Self-Help Groups, with its roots in rural India, caters to the socio-economic development of women. The objective is not only to implement programmes designed for the rural people but also to boost their participation to achieve a more sustainable community development. This paper, based on select rural segments of Darjeeling Hills of the state of West Bengal, examines the participation of women in Self-Help Groups. The purpose is to explore the space and scope for people-centric development with the specific methodological vantage point being participatory development. It seeks to reveal that despite Darjeeling’s political instability and slow progress in rural development, there is considerable scope for the effectiveness and efficiency of participation in SelfHelp Groups in improving women’s life.

What do we already know about interventions to address poverty, food insecurity, and resource scarcity in Ethiopia? A women’s VSLA program implemented by Oxfam in the Somali region led to improvements to access to credit and markets, technology adoption, earnings, access to water and grazing land, wealth, asset ownership, and non-farm business development.

News and commentary on Women’s Groups

The husbands would work and hand over their pay cheques, and the women kept an eye on where every dollar went and needed to go. These women were part of an informal savings collective, where members contribute a set amount to a common fund on a regular basis, and then take turns collecting part or all of the pool to spend on whatever they need – from groceries to school books to a down payment on a home. The order of payouts is typically determined by the “banker lady” running the group, and can be organized by lottery or based on need. (The funds neither charge nor pay interest).

Much gratitude to the Caribbean for Boxhand, Susu and Partner: We now have humane systems of economic cooperation

ROSCAs aren’t new to many of us with Caribbean born parents living in the diaspora. My great-grandmother, Maude Gittens, was a street caterer who lived in Sangre Grande, Trinidad. But she was also a well-known Susu “Banker Lady.” Susu is a local name for a ROSCA. It’s the same name used in Ghana, West Africa — which in fact, is an original source for these co-ops. And Susu can be found among the diaspora outside of Africa and the Caribbean, so in your towns and cities.

₹2400-crore shot in the arm for women's SHGs

Women’s self-help groups (SHGs) in Rajasthan are being strengthened with value addition to their products and evolving market linkages in accordance with the demand. Bank loans worth ₹2,400 crore have been arranged for them with the emphasis on their capacity enhancement. As many as 2.30 lakh SHGs are functioning across the State. 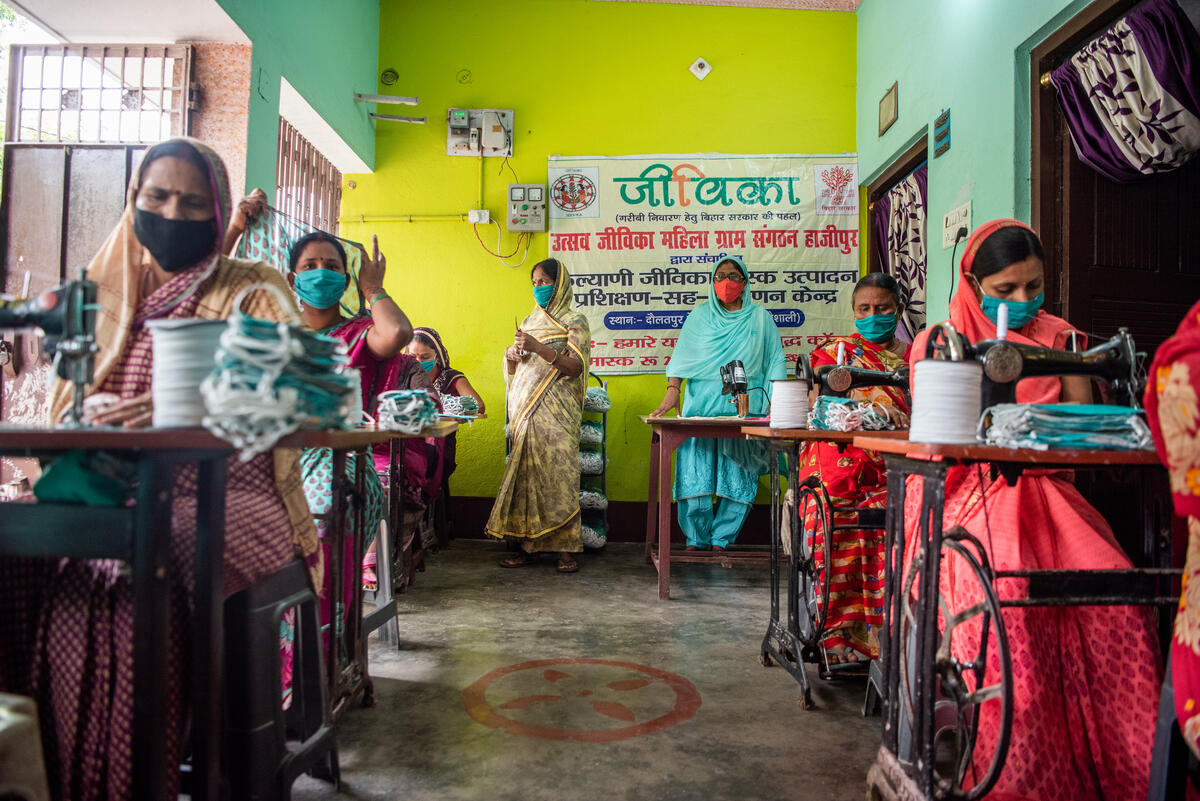