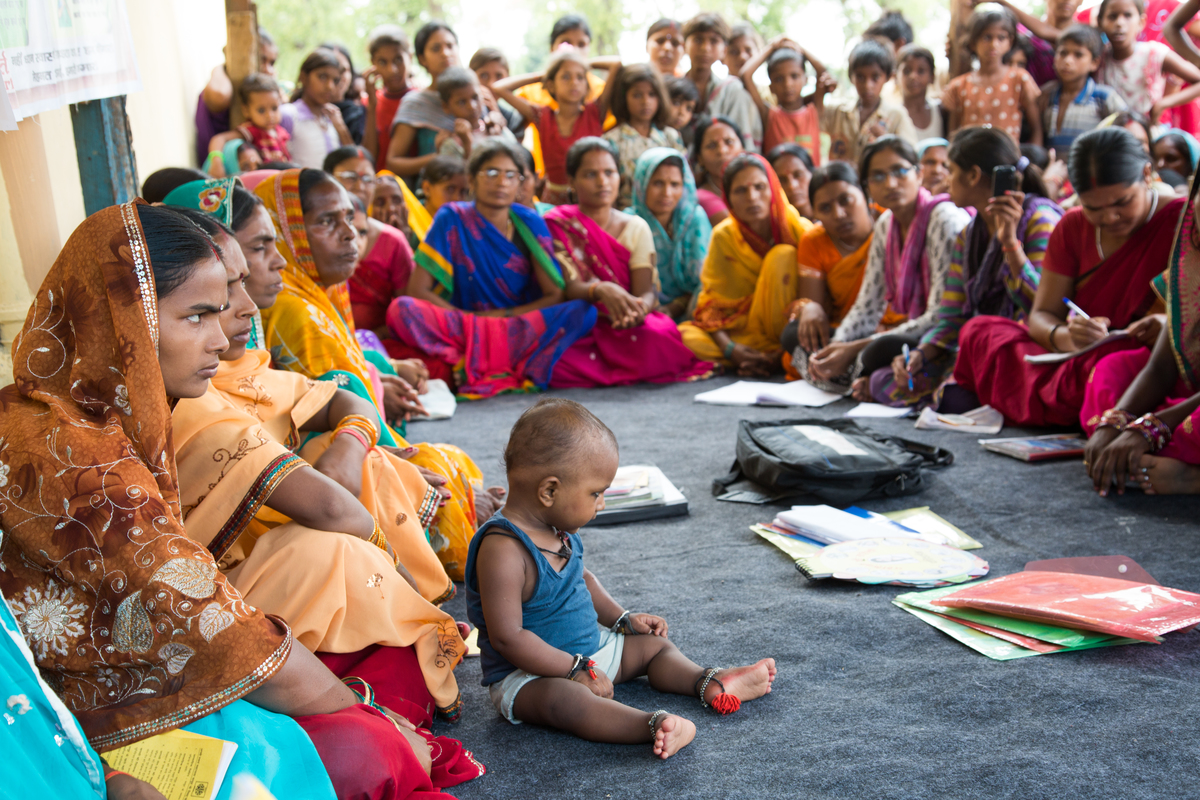 Education, the fourth of UN’s Sustainable Development Goals, enables upward socioeconomic mobility and is a key to escaping poverty. Yet, many children are still deprived of this major asset: before the Covid-19 crisis, projections showed that more than 200 million school-age children will be out of school, and only 60 per cent of young people will be completing upper secondary education in 2030 (see the recent trends in figure 1).

This post reports on a field experiment investigating the impact of Self-Help Groups (SHGs), a very popular and widespread form of accumulating savings and credit associations (ASCAs), in villages of Jharkhand, one of the poorest Indian states.  The study finds large positive effects on children’s post-primary education, though happening only over the medium run and through non-financial channels (the original academic paper can be found here).

This research is based on an original panel data[1] set that we collected in three waves between 2004 and 2009, following the creation of new SHGs by the NGO PRADAN in randomly selected villages of the state of Jharkhand. SHGs are groups of 15-20 women from the same village and homogeneous backgrounds, who voluntarily come together to save and borrow small amounts on a regular basis. After several months of smooth functioning, a savings account is opened at a commercial bank near the village to deposit group savings, and, usually after about two years, groups showing mature financial behavior can access bank loans. SHGs involve frequent, often weekly, group meetings during which members discuss not only financial aspects, but also projects, ideas, or family issues. Collective activities are often organized, and solidarity networks develop among their members.[2]

The sample comprises 1,080 households who were surveyed three times. The empirical analysis estimates the effect of the SHG intervention on the village population, irrespective of household membership (intention-to-treat estimates). We compare the average evolution, over the three survey rounds, of the outcomes of the households living in treated villages (where SHGs were created in 2002) to that in the control villages (where no SHGs were created in 2002). All regressions also control for household fixed characteristics, village fixed characteristics (observed and unobserved), general time trend and climatic shocks.

Education in Jharkhand and potential roles of SHGs

Secondary-school enrollment is still relatively low in Jharkhand. Data from the Demographic and Health Survey of 2015 show enrollment rates in rural areas of 73% for secondary school and 47% for higher secondary school.  Although education is free and compulsory for children below 14 according to the Indian Constitution, school attendance in secondary school involves a number of direct costs such as school fees and expenditures for books, uniforms, and so on. Transportation costs are also important since, while almost all villages have a primary school, secondary schools tend to be far from villages in Jharkhand.

SHG membership can facilitate children’s education beyond primary school through different channels. Most obviously, it may help to bear the direct costs of education through credit in the face of liquidity constraints (e.g. across agricultural seasons) or through to an expansion of households’ economic activity and income. In our sample, the median school expenditure per child enrolled in secondary school amounts to 1,747 INR in 2008, which corresponds to 12% of the median annual household income, or 35 days of work at the median wage rate. The direct costs of education are therefore sizable. Yet, by encouraging income-generating projects, SHGs are expected to affect labor allocation within the family, with conflicting implications for education and child labor. Moreover, more flexible access to credit reduces household vulnerability to negative income shocks (Demont 2020) and can thereby lower the incidence of school dropouts. Finally, SHGs—which are based on frequent group meetings during which women freely exchange and interact—may also play a role in terms of changing attitudes and norms, promoting education among their children. Such changes may happen because of peer effects, through which a member is influenced by the behavior and the decisions made by the other members of the group.

The existing empirical literature on the link between microfinance and children’s education is mixed.[3] Littlefield, Hashemi, and Morduch (2003) review both quantitative and qualitative studies that broadly suggest a positive correlation between microfinance and child schooling. By contrast, most of the randomized controlled trials investigating the relation conclude that microcredit has a negligible or even a negative impact on educational outcomes (e.g. Banerjee et al. 2015).

Post-primary enrollment rates in our sample are low: on average, in the first survey round, 54% of boys aged 12-17 were in school, against 35% of girls. By the last survey round, we find a strong positive average effect of the SHG treatment on secondary-school enrollment, of about 20 percentage points, coming from a lower dropout rate after primary school. This represents a very large treatment effect, corresponding to a 40% increase in post-primary enrollment rates.

We find a symmetric increase in the number of days spent at school and in school expenses. Interestingly, those positive effects apply equally to girls and boys. The increase in enrollment rates happens in the last round of the survey, about 6 years after the creation of the SHGs, suggesting that the impact of group microfinance may require a long time before producing measurable outcomes at the household level, particularly for education decisions. Yet, these effects are preceded by progress at the intensive margin: the grade-for-age ratio[4] of treated children starts improving 3 years after the creation of the SHGs.

Child labor is widespread in the environment under study: in round 1, more than 70% of secondary-school-age children are reported as doing some kind of work, for a total of 18 weekly hours, on average. While most of this labor regards household chores (11 hours on average), a substantial share is devoted to income-generating activities (7 hours on average, 40% of children) [5]. Hence, a possible channel for the effects of SHGs on secondary enrollment could be the reallocation of child time and effort in schooling at the expense of child labor.

Yet, we find that children in SHG villages do not work less in total—even in the medium run—but tend to spend fewer hours on productive activities and more on domestic chores at home (children of SHG households tend to work more often but for a shorter time and more often at home).

These results question the general presumption that child labor and education are substitutes. In figure 2, we report the cumulative density function of the number of labor hours spent by children aged 12–17, depending on their enrollment status. As the figure indicates, enrolled children (plain line) are not less likely to be active than non-enrolled children (dotted line), but a much smaller proportion of them works for more than 30 hours per week. When adding the time spent at school, the distribution of the total number of hours being active for the entire population is clearly bimodal.

Figure 2: Distribution of the number of weekly hours of activity by enrollment status (children aged 12–17). 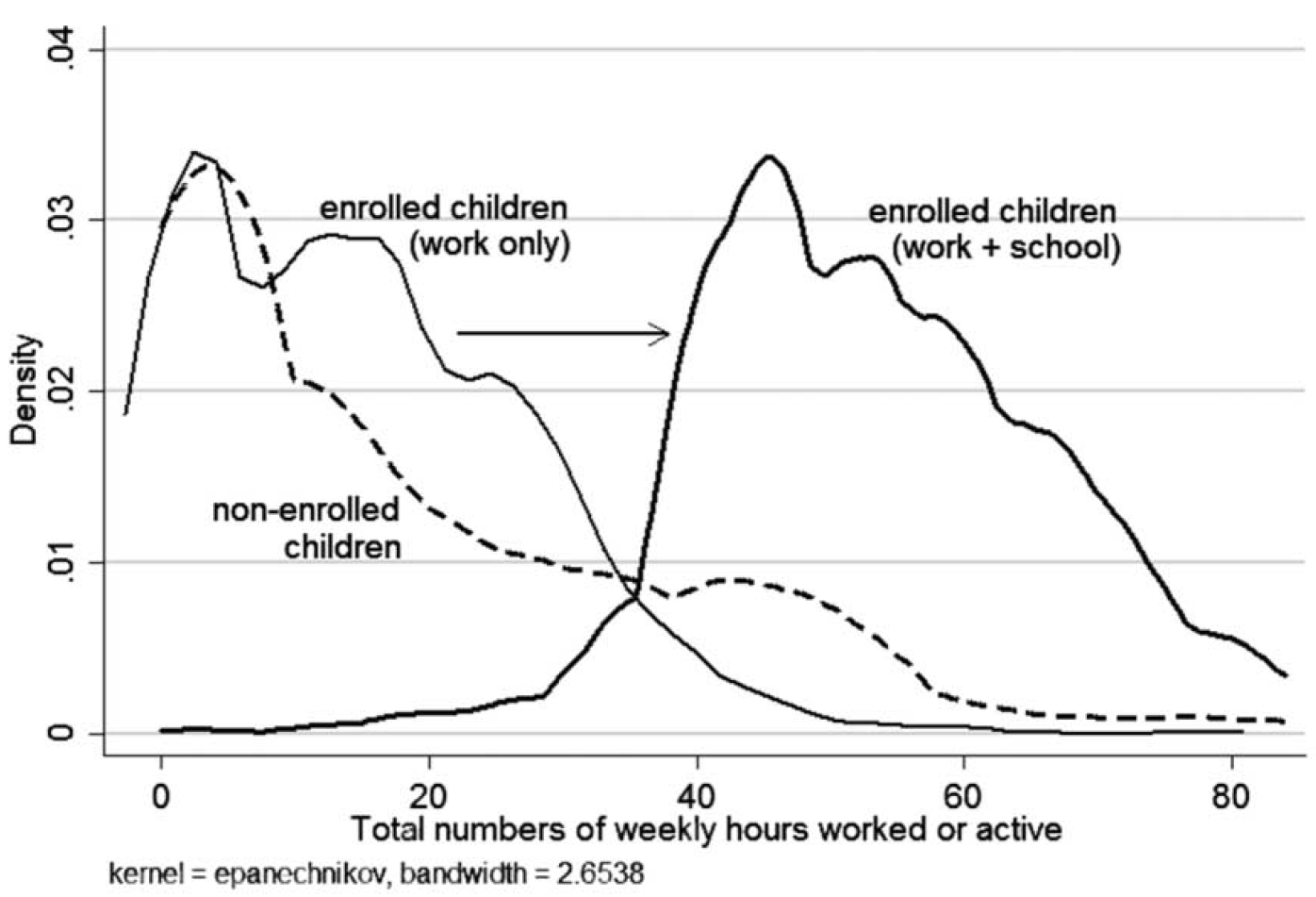 An important role of SHGs is to facilitate access to credit to members. The two main sources of credit in our villages are moneylenders and SHGs. The contracts offered by the latter are much more favorable, even if they bear upon smaller amounts (1,270 INR, or about 17 current US$ on average) and are of shorter duration (7 months, on average). They are also much more frequent.

Yet, contrary to what is usually believed, we show that credit does not play any direct role in the increased schooling. By contrast, we find that social interactions within the SHG play an important role, as enrollment rates are substantially higher for SHG members when other members in the same SHG have children of the same age. This suggests an important role of social influence within SHGs, through direct discussion, role models, peer pressure, or aspiration sharing.

Recent research has painted a rather grim picture of microfinance, indicating that it has often fails to contribute significantly to micro-business creation and poverty reduction in developing countries (e.g. Banerjee et al. 2015). Why is it that so many households throughout the world keep investing large amounts of time and savings in microfinance groups?

One fundamental problem relates to the short span of time over which these experiments are often evaluated. We provide evidence of cumulative long-term effects for outcomes such as children education, implying that short-term estimates may strongly underestimate microfinance impacts.

Another important aspect is related to the heterogeneity of the nature of microfinance institutions and the settings in which they operate. Our results suggest that the social interactions that take place in small-scale, village-based groups can be more important for decisions like education  than the improved access to credit. By being exposed to other women raising similar issues, describing their aspirations and their projects, a woman can feel encouraged to develop more ambitious goals for her children. By experiencing increased autonomy and empowerment within the SHG collective project, she can also be more assertive and proactive with respect to her children’s education.

Overall, our findings indicate that microfinance groups can have large effects on the human capital of participants and their families, although such effects might take time to materialize and happen through unintended channels. The results also indicate that there is no clear substitution between labor and education for children of secondary-school age in rural India.

[1] Panel data (also known as longitudinal data) are data in which multiple entities are observed over time.

[2] The Indian SHG model emerged in the early 1990s, when the Reserve Bank of India (RBI) issued guidelines to all nationalized commercial banks encouraging them to lend to such groups. Today, they are the most important source of microfinance in India, with about 8.7 million bank-linked SHGs (NABARD, 2018). Over the past two decades, India’s SHG movement has evolved from small savings and credit groups that sought to empower poor rural women, into genuine institutional platforms of the poor, used for instance by the National Rural Livelihoods Mission (NRLM), India’s flagship program to reduce poverty. The SHGs in the research sample, however, are ‘limited’ to traditional savings, credit, and peer support activities, together with some limited livelihood programs developed by PRADAN, such as cotton weaving and vegetable cultivation.

[3] More references can be found in the full paper.

[4] The grade-for-age ratio is computed as: highest grade achieved/(age-6). This ratio takes the value 1 if the child is currently enrolled at the right age and a value lower than 1 if the child has either repeated one or several year(s) or left school.

[5] See the original paper for details on definitions and collection method.