How Self-help Groups Enable Households to Cope with Climatic Shocks

Climate variability and extremes, combined with a lack of appropriate insurance devices, pose a risk to rain-fed agriculture and large populations in developing countries. This article examines how self-help groups (SHG) support poor rural households in the state of Jharkhand in coping with monsoon deficit. It finds that microcredit and networks provided by SHGs enhance households’ food security and enable them to undertake seasonal migration.

The World Bank estimates that 26 million people fall into poverty each year because of natural disasters (Hallegatte et al. 2017). According to FAO (Food and Agriculture Organization) et al. (2018), climate variability and extremes are a key driver behind the recent rise in global hunger.

Informal risk-sharing arrangements have often been shown in the literature to be largely imperfect in smoothing income shocks, especially those stemming from weather events (Dercon 2005). In this context, reliable access to finance, and credit in particular, can provide welfare-improving opportunities to mitigate shocks and smooth consumption. Although (or perhaps because) the argument is theoretically well-accepted, there is very little direct empirical evidence as to how microcredit impacts the capacity to cope with (climate-related) income shocks.

In recent research (Demont 2020), I explore the effects of monsoon intensity on credit access, food security, and seasonal migration of rural households in Jharkhand, and investigate how self-help groups (SHGs) – a versatile model of local savings and credit associations – help households to cope in this respect.

I analyse original panel data[1] from a long-term field study that randomised access to SHGs at the village level, and measured changes in the living standards of a sample of 1,080 households between 2004 and 2009. Households in the sample are small landholders (94% of whom own less than 2 acres of land, on average), who by and large practise subsistence agriculture with limited marketable surplus. Rice is often the main source of food and agricultural income.

These household data are combined with historical monthly rainfall data at the village level, from the Global Precipitation Climatology Centre (GPCC). As shown in Figure 1, there is a lot of variation in monsoon rainfall across both time and space. I construct a shock indicator, defined as a monsoon deficit from the long-term village average that is higher than 0.5 standard deviation[2] which corresponds to a (mild) drought occurring once every three years on average. 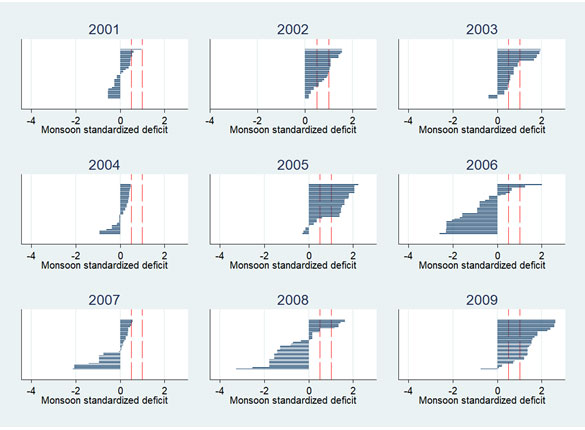 Note: (i) The figure presents z-scores. Z-Score is the number of standard deviations a given data point lies away from the mean (average). (ii) Dashed lines indicate rain shocks, that is, deficits larger than 0.5 and 1 standard deviation.

Table 1 reports the estimated treatment effects (‘intent-to-treat’ estimates)[3] at the village level, expressed in percentage: row (1) gives the percentage change in the outcome indicated in the heading after a rain shock in ‘control’ villages, and row (2) shows the differential change (relative to control villages) in ‘treated’ villages.

Table 1. Impact of rain shock in villages with (treated) and without (control) SHG intervention

Note: (i) Percentage effects have been reported.

I find that rice yields drop by 22% after a rain shock and that treated villages are not statistically different. That is, rainfall shocks represent large exogenous (external) income shocks, which cannot be dealt with through inter-household transfers or other informal insurance mechanisms.

Given that Jharkhand is one of the Indian states with the highest levels of hunger and malnutrition prevalence (Menon et al. 2008, India State-Level Disease Burden Initiative Malnutrition Collaborators, 2019), a key dimension of household welfare under rain shocks is therefore food security. In the data, households have enough food for all members to enjoy three daily meals during 10.7 months per year on average, with 34% of them suffering hunger for at least one month per year. As can be seen clearly from Figure 2, food security decreases gradually with time since the last rice harvest, reaching its lowest point in the June-September period - which corresponds to the bridge period where the income shock is expected to hit hardest.

Figure 2. Food security across months of a year 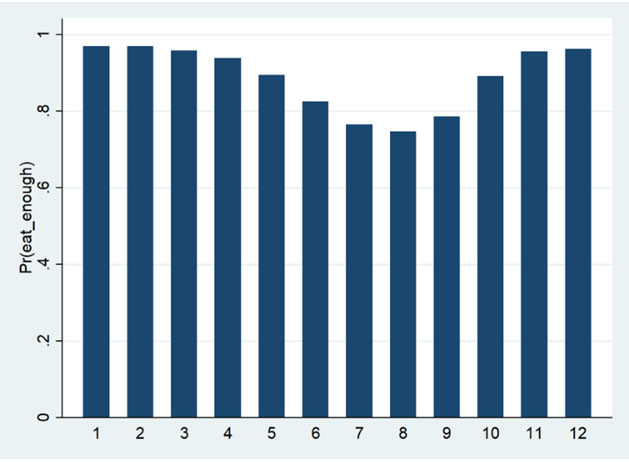 Note: the vertical axis shows the probability that every household members eat three meals a day.

I find that food security depends heavily on monsoon intensity, though it is significantly more stable for treated households. After a negative shock, control households lose, on average, 1.6 months of sufficient food, while the loss is only about 0.9 month for treated households (a 41% improvement). Hence, it appears that SHGs help households to ensure that there is adequate and steady food consumption across months when harvests are low and prices are high. This in turn can provide large health and economic benefits in the long run, given the adverse consequences of food consumption volatility emphasised in the literature (for example, Alderman et al. 2006, Maluccio et al. 2009, Rao et al. 2009).

The previous effect is partly explained by SHG credit. Indeed, while credit dries up dramatically for control households during the lean season following a bad monsoon (suggesting credit rationing from informal lenders), I find that treated households enjoy a stable access to credit over time. Hence, SHGs keep playing their crucial buffer role even in case of (largely covariate ) climatic shocks. The main reasons are that SHG members do not borrow from their current money but from a pool of accumulated savings growing over time, and this pool is complemented by external loans from commercial banks.

The availability of credit under covariate income shocks is all the more important since private transfers also dry up dramatically in these periods (-30% for transfers received, and up to -70% for transfers given).

However, credit needs to be repaid and is therefore only a temporary solution, offering liquidity during the most constrained season. Alternative income-generating activities must be developed to sustain a higher level of consumption. Such credit might help finance risk-mitigating activities in expectation of the impending income shock.

In rural India, many households complement agricultural income with some kind of off-season labour activity, such as casual labour or handicrafts. In the sample, only 14% of the households send at least one member into seasonal migration in any year (for 3.4 months on average), reflecting the large direct, indirect, and utility costs associated with migration.

I find that treated households significantly increase seasonal migration immediately after the realisation of a bad monsoon, in order to mitigate the future agricultural income shock through temporary profitable occupations far from home. I find that after a drought (more than 40% monsoon deficit) there is an average increase of Rs. 450 in the monthly income of treated households through seasonal migration, which is roughly equivalent to the cost of half a month’s food.

I show that such migration is a direct result of SHG credit, which facilitates the payment of sunk costs and attenuates the income risk related to migration – but that it also results from a side-effect of SHGs – which is that they constitute peer networks in which information and experience exchanges can take place.

These results confirm the study of Bryan et al. (2014) in a situation where credit is not earmarked in any way for migration, suggesting that seasonal migration is a common mitigation strategy, though often unfeasible due to lack of appropriate credit and networks.

SHGs represent one of the most successful and sustainable microfinance instruments in the world, which spread widely throughout rural India and beyond (in stark contrast with more complex and costly microinsurance products, for instance). This raises the important question of how far such simple, yet complex, deep-rooted, and widely accepted informal institutions can go in ‘insuring’ poor households against income shock, including those resulting from extreme climatic events. By offering relatively cheap and flexible credit, and by combining internal accumulating savings with external credit taken jointly from commercial banks, SHGs present interesting characteristics in this respect.

To my knowledge, this is the first study to provide direct causal evidence on how microcredit enables households to react to objective climatic shocks. It shows that small-scale, local, and poor-oriented credit institutions such as SHGs can contribute to the management of climatic shocks, significantly increasing households' resilience and adaptive capacity, with major health and economic consequences.

The findings offer potentially important policy implications. Weather shocks are ubiquitous and expected to increase in future due to climate change, with major health and economic consequences for millions of poor farmers. In contrast to the widespread adoption of microcredit, attempts at introducing explicit microinsurance products have met with very limited success (see, for example, Cole et al. 2013, Platteau et al. 2017). This may require a rethinking of development strategies aimed at reducing risk. Rather than trying to design new formal insurance products for poor small-scale farmers in developing countries (which are likely to remain too costly, complex, rigid, and risky in most cases), building on the success of local credit and savings associations such as SHGs may be a better option. In particular, there may be ways to marginally change the way microcredit operates to further enhance households' risk management. For instance, SHGs' policy of forced savings, though central to their resilience, may nevertheless be too rigid to play an effective insurance role over multiple years under major adverse shocks. Well-established SHGs could profitably explore the possibility of relaxing the regular savings constraint during periods of economic hardship.