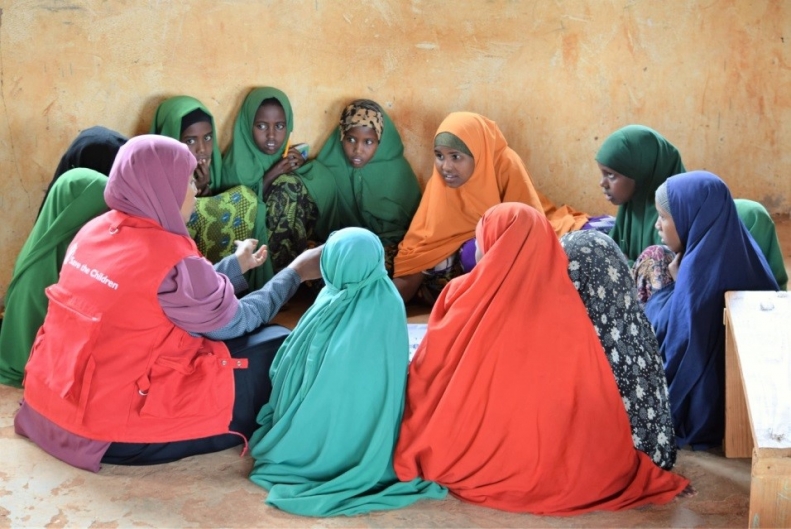 Photo Credit: Save the Children

This blog is based on an article published in Global Health: Science and Practice, Close to Home: Evidence on the Impact of Community-Based Girl Groups.”

Programming delivered through community-based girls’ groups (CBGGs) has proliferated in low and middle-income countries (pioneered in large part by the Population Council as “safe spaces” for adolescent girls).  For example, “social asset building” through mentor led CBGGs was a core intervention in the major DREAMS Partnership to prevent HIV in 15 countries. Though not always in step with programmatic investment, evidence on the impact of community-based girls’ groups also has grown over the last decade. Now, enough rigorous impact evaluations exist of programs using CBGGs to analyze features of their implementation and impact.

We conducted a literature review of the evidence on CBGG programs, extracting information on how programs with CBGGs were designed and their effects. While a formal systematic review was beyond our scope, we subjected the literature on CBGG programs to rigorous selection, search, abstraction, and analysis methods to produce a holistic, informed assessment of this program delivery model.  We examined aspects of program design that have an influence on the likelihood of impact, including features like participant and group leader (CBGGs are often led by a slightly older female mentors) characteristics, group size, meeting frequency, program duration, and topics covered.

Three clear lessons emerge from the review of implementation details of CBGG programs in our sample:

First, characteristics such as group size, program duration, and length of sessions were characterized by extreme heterogeneity. Among this diverse collection of characteristics, the most common group size was 15 to 25 girls who typically met in groups weekly for 1 to 3 hours; nearly half of those reporting on program lifespan operated for more than a year.  Notably, under half of the programs provided information on participation, which is vital to understand participants’ exposure to the program.  The pattern was somewhat clearer regarding the content that CBGG programs covered: nearly all programs provided life skills training, and nearly all addressed more than one type of topic. Most combined life skills with economic and financial topics (e.g.: income generation, financial literacy, micro-savings).

Second, most CBGG programs in our sample targeted large, diverse groups—alternately defined as 10 to 19 year olds; in and out-of-school girls; married and unmarried.  In summary terms, the largest number of programs targeted unmarried girls aged 13–18 years who were both in school and out-of-school; more programs occurred in rural than urban areas.  Only one-third of the programs reported that they adapted aspects of their programming to account for the diversity among participants, which is concerning given the heterogeneity of adolescent experiences.  A density of transitions occurs internally and externally from early to late adolescence (internationally defined as the years from 10 to 19), not to mention the differing life circumstances of in-school, unmarried 16 year olds and out-of-school, married 16 year olds.

Adolescent programming cannot be ‘one size fits all.’  CBGGs need to adopt tighter targeting criteria or segmented approaches designed to take account of girls’ heterogeneity.  Experience from multiple regions confirms that programs are likely to miss adolescent girls at the highest risk of outcomes like child marriage, early pregnancy, HIV infection, and economic instability without intentional efforts to reach them.

You may read this and wonder which design features were the most effective.  We have a similar question, which brings us to the third lesson: we need much more information about design and implementation details than the literature provides. This is especially important as CBGG programs expand and scale up; planners need implementation guidance based on documented ‘lessons learned’ to promote fidelity and enhance the likelihood that successful small-scale programs will have the same impact as coverage expands.

The results of this review are a step towards more evidence-informed programming, but an analysis of the interaction between different design features and effects would go even further. To be sure, aspects of the program designs we examined are proven—for example, mentors are more effective when similar to their mentees, confirming the importance of locally-recruited female mentors in CBGGs. However, the degree of heterogeneity in the target populations, the description of implementation details, and the indicators used prevented an assessment of the most effective design features. Drilling down on success features is an essential next step as programs mature and the evidence base continues to grow.