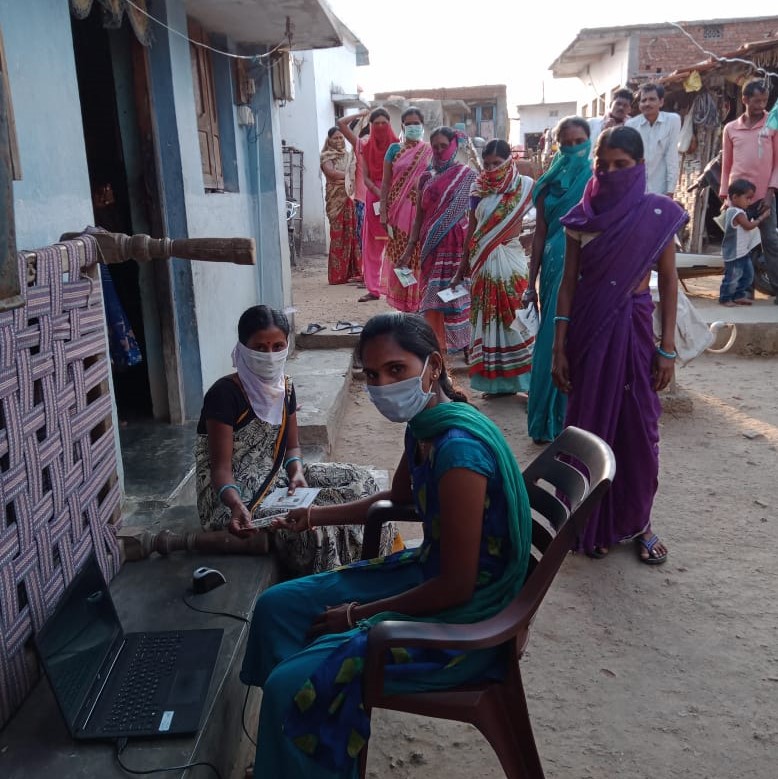 It’s 7 a.m. in a remote village in India’s Bihar state. Punam Kumari, a bank sakhi, is ready to serve her customers. Many of them have already arrived at her customer service point (CSP). She ensures that everyone is complying with social distancing norms while she also takes COVID-related safety precautions for transactions she conducts.

This early morning routine represents a major shift in how she works. She used to open her outlet at 10 a.m., but since the lockdown was imposed by the government to curb the spread of COVID-19, she has been working from 7 am to 7 pm providing financial services to the village. She caters to customers at her CSP outlet and at a nearby school, where she’s set up shop at the request of local authorities.

Thanks to her and her colleagues, known colloquially as bank sakhis, what would otherwise have been a daunting task of accessing money during COVID-19 has been made easier for rural women. Bank sakhi – literally “female banker friend” in Hindi – is an informal term for female banking agents, who are collectively known in India as business correspondents (BCs). Equipped with smartphones, tablets, or laptops and biometric scanners, they provide basic banking services and financial access for women, self-help groups and many others in some 20,000 difficult-to-reach villages in rural India. Punam has been a bank sakhi since 2018 after her husband passed away, and she needed a way to support her three children.

The BC model, supported by the Reserve Bank of India (RBI) since 2006, allows third-party agents to provide banking services on behalf of banks, eliminating the need for brick-and-mortar structures. In 2015-16, a female BC model was promoted by the National Rural Livelihoods Mission (NRLM), with support from the World Bank, financed the National Rural Livelihoods Project (NRLP), which was built on the GIZ-NABARD experience. This pilot initiative helped in reducing the gender gap in access to financial services and provided a regular income stream for local women who were trained and employed as BCs. Fifty-four percent of Pradhan Mantri Jan Dhan Yojana (PMJDY) account-holders are women and, unofficially, most BC agents are men, but these women BC agents are servicing first-time women customers and challenging gender disparities in an otherwise male-dominated profession. On average, approximately 6000 NRLM BCs across 9 low-income states collectively complete 700,000 transactions each month, worth over INR 2.5 billion.

Leveraging the Power of Business Correspondents During the Pandemic

In the past couple of months, Punam’s business volume has increased considerably due to the government-initiated direct benefit transfer (DBT) schemes as part of the Pradhan Mantri Garib Kalyan Yojana (PMGKY) – COVID-19 relief package announced by the prime minister on March 26. Under the PMGKY, 206 million PMJDY women account holders are now receiving INR 500 per month for three months.

During the COVID-19 lockdown, BC agents have proven effective in the delivery of financial services in rural areas and have been granted exemption because the Indian government has now classified their services as essential. In Bihar, Odisha, Madhya Pradesh, Jharkhand, Chhattisgarh and several other states, bank sakhis have continued working to provide cash flow in their villages since the lockdown. They now wear gloves while conducting the transactions, regularly sanitize their devices and require all customers to wash or sanitize their hands before completing the required biometric scanning. While they’ve had to discontinue service delivery at their customers’ doorsteps during this period, they’ve set up services from home, roadsides, and are helping with information dissemination in communities, ensuring that their customers are aware of COVID-19 guidelines on quarantine, handwashing and social distancing.

Insights on BC Transactions During the COVID-19 Era

A quick review of daily transactions of 39 bank sakhis (SHG-BCs in the graph below) of a private sector bank in rural Bihar — the data was collected from mid-March to April — reveals three interesting points:

The combination of supporting the expansion of female BCs with the PMJDY transfers to female accounts is a powerful signal that the well-being of women and their households is a priority. A 3-point program is proposed as a way forward to maintain the positive impact of this program.

The banking sector will need to strengthen backend systems and technology to support the increased load of concurrent users on their network and provide uninterrupted access for rural customers. With increasing dependency on bank transfers, the direct impact of failed transactions on building trust and maintaining cash flow for beneficiaries should be a priority for the banking sector.

There have been operational challenges for Punam besides the COVID-19 safety precautions and long hours. She has to withdraw money from her bank account to serve customers, but the nearest bank branch is about 8 km from her village. Due to the lockdown, there’s no public transportation. She is also facing more transaction failures, when customers’ accounts get debited but her device shows them as failed transactions. Generally, such failed transactions are reversed within a few days, but convincing customers has now become very difficult as most of them have a very limited amount of money in their account and the helpline numbers of banks are not geared towards managing this additional traffic.

Despite all these challenges, Punam Kumari and her colleagues are determined to provide financial services to their customers. We salute Punam, and many such unsung heroes who are silently and diligently waging a war against the economic shocks of the COVID-19 pandemic by providing financial services to needy and vulnerable people. We’re also grateful for the constant support provided by the State Rural Livelihood Missions in supporting BCs, even during the crisis.

Note: This post was originally published on the CFI Blog.